How the time clock changed the way we work | Wageloch 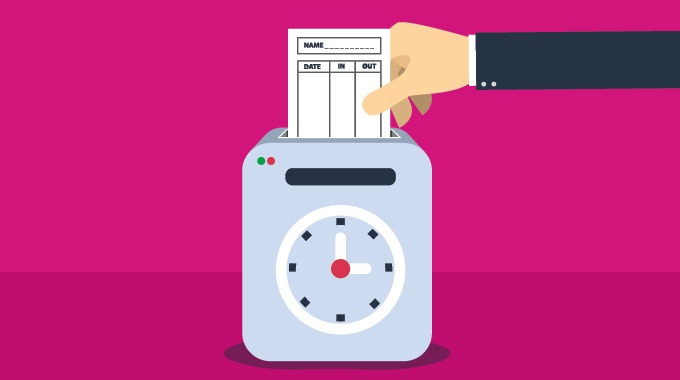 Did you know a New York jeweller invented the world’s first employee time clock? Back in 1888, Willard Le Grand Bundy changed the way we work by building an elaborate wooden device that punched a card to record staff attendance.

The beginning of the Bundy time clock

Known as a Bundy clock, it quickly appeared in workplaces around the world. There was even one at David Jones in Sydney (there’s a great photo you can Google showing store assistants lining up to punch their time card in 1930).

Bundy time clocks were also used in Birmingham in the UK to keep tabs on bus and tram drivers. They would reach their final destination, hop out, and enter a unique code into the kerbside clock. This would be recorded on a paper tape stored inside the top of the clock.

While they quickly fell out of favour – with many of the ornate green and blue devices becoming rusted relics – the Bundy time clock became the clocking tool of choice for many industries.

The new wave of time clocks

Sure, the original time tracking clocks looked spectacular. But they weren’t without their flaws. If you were running late or skipped your shift, one of your colleagues could punch in for you. And like everything in the pre-digital age, they created a mountain of manual tasks as managers had to collect, check and compare the cards against the roster.

Thankfully, things have moved on (and rather quickly) in the decades since. Now there are a bunch of automated time clock systems to choose from:

These are far more accurate, intuitive and easy to use – and eradicate all the issues associated with manual employee time clock machines.

Imagine going back in time to tell those department store sales assistants that today, they could clock in by scanning their eye or face. What would their managers think about a device that didn’t just record when workers arrived at and left work, but also magically sent the data to a computer that matched it with their rosters and payroll?

Perhaps they’d worry the technology could put them out of a job. But of course, we now know that it simply frees you up to focus on the bigger business tasks – like planning, projects, staff training and more.

Not only that, but with compliance being more complicated now than ever before, having a program that can navigate industry award and allowance updates is imperative for saving time and reducing risk.

Just look at Fair Work Australia’s new rules introduced in March last year, which made it compulsory for employers to keep clocking records for salaried staff under certain awards who earn up to $148,700.

This was a shock for many industries – including finance, legal services and broadcasting – who had to suddenly scramble to implement employee attendance time clock systems or risk fines for non-compliance.

We’d like to see the original Bundy clock try to keep up with today’s increasingly complex world!

The future of time clocks

Looking ahead, it’s exciting to dream up the time clock systems of the future – especially as the workplace becomes more agile, flexible and remote.

In the meantime, a clocking device can help you and your team keep track of time, pay, awards and allowances easier than ever before.

To see which employee time clock system is best for your business, book a demo today with our friendly team in Australia today.

The information in this article is intended as a guide only, providing an overview of general information available. It’s not intended to be an exhaustive source of information and should not be seen to constitute legal or tax advice. You should, where necessary, seek a second professional opinion for any legal or tax issues raised in your business affairs.